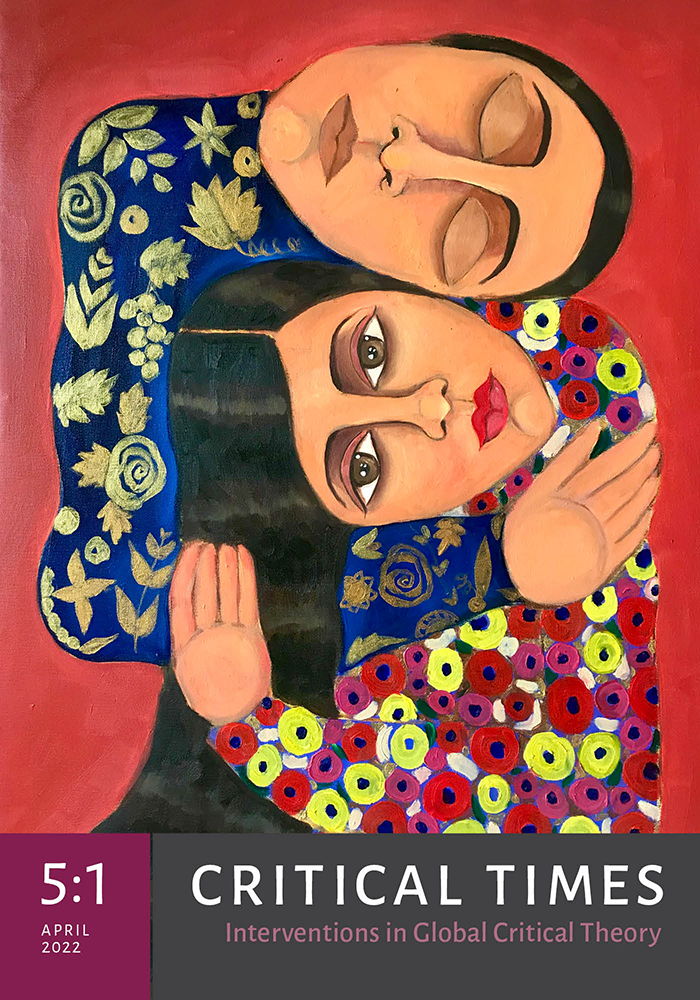 The International Consortium of Critical Theory Programs is pleased to announce the publication of the first issue of volume five of Critical Times, published by Duke University Press at https://read.dukeupress.edu/critical-times

The scholarly essays in the issue bring together debates on academic freedom, political theology, and life in the ruins of capitalism to make visible a set of vital alternatives—to state-protected academic freedom, to neoliberal, humanitarian, and colonial logics of deferral, and to political and economic life in the capitalist present. Joan W. Scott distinguishes academic freedom (granted to scholars by the state) from the right to free speech (a human right granted to individuals), and, inspired by Turkey’s Solidarity Academies, argues for the necessity of an academic freedom ensured not by states but by non-state actors. Adam Y. Stern reads Gershom Scholem’s oeuvre to reflect on how Israeli colonial rule deploys the logic of messianic deferral as a “secular modality of power,” one that connects the political theology of Zionism with a Christian history of empire. Finally, drawing on ethnographic work on miners in Marmato, Colombia, Laura Quintana considers the critical agency and the reconfigurations of political and economic life possible amid the ruination produced by capitalism.

The issue concludes with an artistic intervention by feminist Palestinian artist Malak Mattar, whose life and work is introduced by Critical Times art editor Winnie Wong. The sketches and oil paintings included here were produced during the Israeli sustained military bombardment of besieged Gaza in May 2021, to document the deaths of Mattar’s neighbors and her own family’s fear.

Critical Times is a peer-reviewed, open access online journal that seeks to foreground encounters between canonical critical theory and various traditions of critique emerging from other historical legacies, in an effort to highlight the multiple forms that critical thought takes today. We publish essays from different regions of the world in order to foster new paths for intellectual exchange and reformulate the field by accounting for its regional and linguistic inflections. The journal is published three times a year and invites submissions in the form of essays, interviews, dialogues, dispatches, visual art, and various other platforms for critical reflection, transnational exchange, and political reflection and practice.

Please visit the Critical Times website for more information on the journal and on how to contribute. Inquiries can be sent to criticaltimes@berkeley.edu.